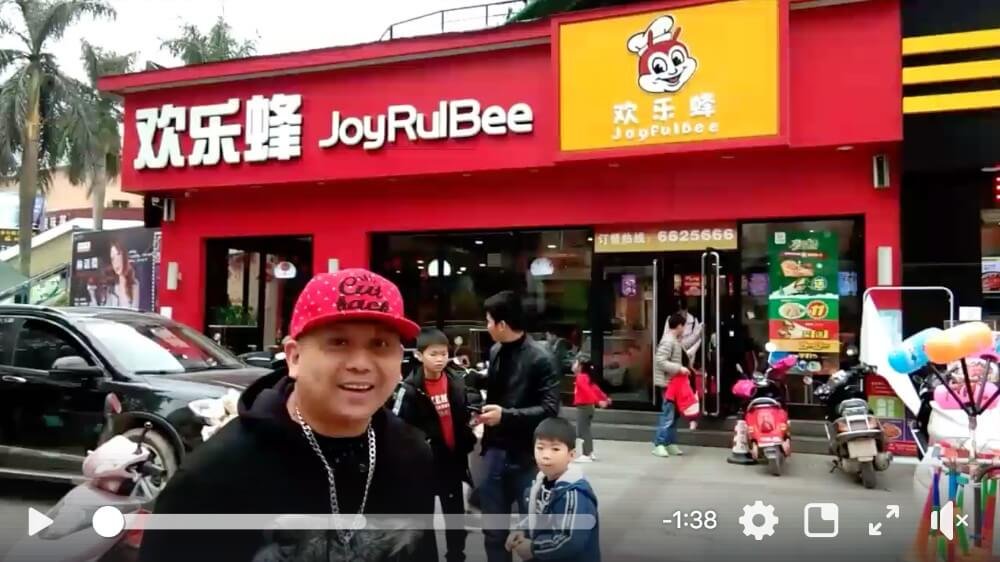 China has been known for producing cheap imitation products of popular brands. However, it still came as a surprise when even a popular fast food restaurant did not escape the ingenuity of a Chinese entrepreneur.

Guzman is among the 12,000 overseas Filipinos in mainland China. On his FB post, he said that in 10 years that he has been living in China, this is the first time that he has seen this JoyRulBee.

Guzman and his wife dined in to try the Chinese hamburger place and observed that the items in the menu also looked similar to the original Jollibee menu.

As shown in the video, the China-based food outlet’s has the same logo similar to Jollibee’s popular bee mascot. and menu as the original Jollibee restaurant. Even the counters, display and the menu inside the restaurant looks like a Jollibee outlet, except the are in Chinese.

Guzman said that he took some pictures and videos of it because he was surprised to see his favorite Filipino fast-food restaurant in China.

The photos and videos have since gone viral and did not go unnoticed by Philippine media.

ABS-CBN and GMA News both reported that Jollibee Foods Corp said it was “taking steps” to protect its trademark rights after a photo of a fast food outlet in China with a similar store design went viral on social media.

JoyRulBee has been brought to the attention of Jollibee even before the post went viral, the Filipino giant’s assistant vice president for Brand, Communications, PR and Digital Marketing Arline Adeva said in a statement.

“Our legal team has been taking the necessary steps in order to protect and uphold our company’s trademark rights as what is provided for under the law,” she said.

Filipinos with COVID-19 outside PH now 736

By Jared Mondschein, University of Sydney A timeless tradition in political journalism is trying to find a narrative that...
Read more
Politics + Society

US election 2020: live count of the race to the White House and state-by-state breakdown of Senate races

Donald Trump has COVID-19. How might this affect his chances of re-election?

By Timothy J. Lynch, University of Melbourne With just a month left until the November 3 US presidential election,...
Read more
Politics + Society

The first US presidential debate was pure chaos. Here’s what our experts thought

Because of the internet and social media, it is now easier for men and women to meet someone from the other side...
Read more
Lifestyle

Filipino food is ‘bland’ and the ‘worst in the region’

If you want to pick a fight with Filipinos, try criticizing them about their food. Take for instance Tom Pepinsky’s tweet placing...
Read more
Lifestyle

Netflix’s new show ‘Street Food: Asia’ which debuted on April 26, 2019 ventures into the street food culture and what goes on...
Read more
Lifestyle

Forget what you know about emotional support animals (ESA), because the ESA mythbusters are here, reporting for duty! It's been a...
Read more
Lifestyle

To be Small is to be Radical

A few years ago, after coming across the writings of Benedictine abbess Christine Valters Paintner I started the Word of the...
Read more

MANILA -- Money transfer leaders Western Union, LBC and Pera Hub are hopeful about the continued strength of their tie-up after noting that their...
Read more

To be updated with all the latest news, offers and special announcements.