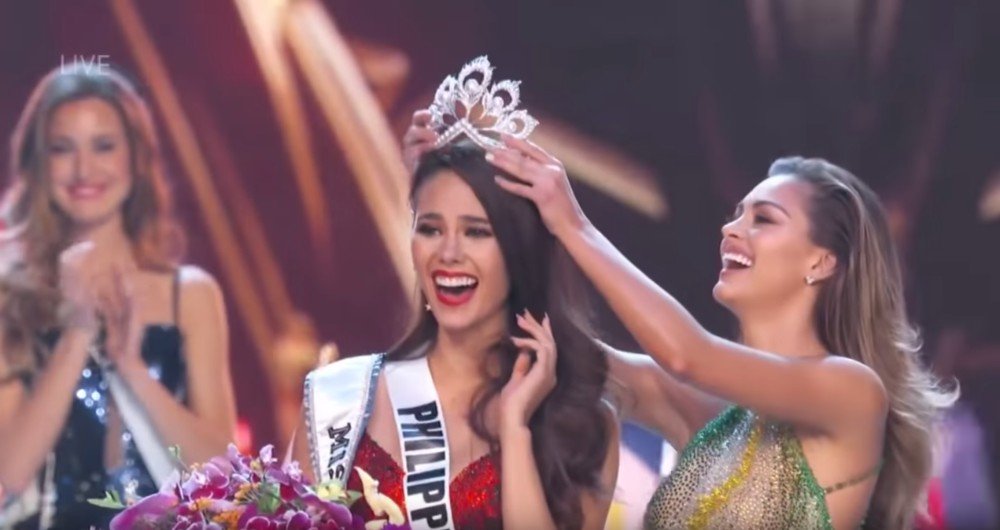 The sun is not the centre of the universe. The Philippines is!

Catriona took her first walk as Miss Universe in a fire red gown, the same one she sashayed during the Evening Gown competition, which was created by Filipino designer Mak Tumang, who took inspiration from the Mayon Volcano. Mak shared in an interview that Catriona wanted to wear a red gown for the pageant. This was as early as when she copped the Bb Pilipinas crown in March.

During the press conference and also posted on her official Instagram, she said, “When I was 13, my mum told me, ‘Honey, I dreamt of you winning Miss Universe in a red dress.’ At that time I thought nothing of it, and today my mother’s dream came true.”

Cat was an early crowd favourite during the preliminaries of the competition, and people were floored by her “slow-mo twirl” during the swimsuit round and her so-called “lava walk” during the evening gown runway walk. Supermodel Tyra Banks tweeted a video of Cat and captioned it “Pinoy power to the max!” and post-pageant tweeted on the micro-blogging site, “You did it! And that walk and confidence? I mean… next level fierce.”

An Instagram story by another supermodel Ashley Graham posted after the show had this shoutout, “Congratulations Philippines. You’re so beautiful and you deserve the crown.”

Vogue.com even predicts that Cat’s signature walk could land her in the fashion runway of Milan or Paris. In an article posted online, this was Vogue’s forecast, “With a title under her belt and the glowing endorsement of two of modeling’s biggest names, Gray may find herself an in-demand commodity once shows start—if you think a viral moment can’t translate into fashion success, you haven’t been paying attention the last few years. Only time will tell if her signature stomp will find its way to Milan or Paris, but given that 2016’s Miss Universe winner Iris Mittenaere wound up walking couture for Jean Paul Gaultier, it may only be a matter of time before the lava walk hits the runway.”

But among Cat’s most memorable moments in the pageant was her response to the Q&A. Answering a uniform question for all top three contenders, “What is the most important lesson you have learned and how will you apply it to your time as Miss Universe?”, she said, “I work a lot in the slums of Tondo, Manila and the life there is poor and very sad. And I’ve always taught myself to look for the beauty of it and look in the beauty in the faces of the children and to be grateful. And I will bring this aspect as a Miss Universe to see situations with a silver lining and to assess where I could give something, where I could provide something as a spokesperson. And this I think if I can teach people to be grateful, we can have an amazing world where negativity could not grow and foster and children will have smile on their faces.”

Catriona, 24, was born in Cairns, Queensland to an Australian father and Filipino mother. She was among the top 5 in the 2016 Miss World pageant. She has a Masters Certificate in Music Theory from Berlee College of Music in Boston.

A day after her win, she tweeted a photo of herself with the caption, “My life is but a dream. Para sa ‘yo Pilipinas”.

Gray became the fourth Filipina to be crowned Miss Universe.

Prior to winning the title of Miss Universe, Gray joined and won the following major competitions:

The pageant was hosted by comedian Steve Harvey and supermodel Ashley Graham. American singer-songwriter Ne-Yo performed before the announcement of the winner.

This year’s pageant hit a record of 94 contestants from all over the world.

Unlike in previous years, the Miss Universe contestants were trimmed down to 20 semi-finalists, compared to 16 in 2017 and 13 in 2016.

The initial semifinalists were selected through a closed-door interview and a preliminary competition held several days before the coronation night. The continental format, introduced in the 2017 edition, remained—consisting of five semifinalists from Europe, five from the Americas, five from Africa and Asia-Pacific and five wildcards, regardless of continental grouping.

A new section this year was when the top 20 were tasked to give an opening statement—a 15-second statement about the contestant—to the judges and viewing public.

The judges narrowed the semi-finalists down to the top 10 who then competed in both swimsuit and evening gown portions. Then, judges decided the top five to compete in the preliminary question and answer portion. The judges further cut down to the top three. The top three participated in the final word and final look portions, and the judges chose Miss Universe 2018 and her two runners-up.

This year, there was no online voting component for viewers at home.

During the national costume show presentation, Gray showcased a beaded tribal suit featuring the indigenous tribes of the ancient pagan Filipinos, alongside an oversized parol (painted Christmas lantern) pulled by a roller device. The costume was accompanied by a pre-Christian Shamanic dance of the historical Babaylan paganism.

In the pageant’s preliminary stages, Gray stunned netizens with her slow-motion turn on the ramp in the swimwear competition wearing a pink swimsuit, which gained praises from fashion commentators and viewers.

During the first question and answer round, host Steve Harvey asked Gray this question, “Canada recently joined Uruguay as the second nation in the world to make marijuana legal. What is your opinion on the regularisation of marijuana?” She responded:

I’m for it being used for medical use, but not so for recreational use. Because I think if people will argue then what about alcohol and cigarettes? Everything is good but in moderation.

In the final question and answer portion, the top three contestants were asked the same question by Harvey: “What is the most important lesson you’ve learned and how will you apply it to your time as Miss Universe?” Gray answered:

I work a lot in the slums of Tondo, Manila and the life there is poor and very sad. And I’ve always taught myself to look for the beauty of it and look in the beauty of the faces of the children and to be grateful. And I will bring this aspect as a Miss Universe to see situations with a silver lining and to assess where I could give something, where I could provide something as a spokesperson. And this I think if I could teach people to be grateful, we can have an amazing world where negativity could not grow and foster and children will have smile on their faces.

Gray’s answer in the final question-and-answer portion virtually clinched the title for her.

Clad in a fiery red evening gown by Filipino designer Mak Tumang, Gray gracefully walked into the pageant’s runway as she was named the new Miss Universe.

Gray was born in Cairns, Queensland to a Scottish-Australian father, Ian Gray and a Filipino mother, Normita Ragas Magnayon, a Bicolana from Oas, Albay.

Gray studied at Trinity Anglican School in Cairns. She received a degree in Music Theory from the Berklee College of Music in Boston, Massachusetts. She also obtained a Certificate in Outdoor Recreation and a black belt in Choi Kwang-Do martial arts.

According to Wikipedia, Gray was the lead singer of her school’s jazz band and also starred in local productions of Miss Saigon. After finishing high school in Australia, she moved to Manila where she worked as a commercial model.

Filipinos with COVID-19 outside PH now 736

By Jared Mondschein, University of Sydney A timeless tradition in political journalism is trying to find a narrative that...
Read more
Politics + Society

US election 2020: live count of the race to the White House and state-by-state breakdown of Senate races

Donald Trump has COVID-19. How might this affect his chances of re-election?

By Timothy J. Lynch, University of Melbourne With just a month left until the November 3 US presidential election,...
Read more
Politics + Society

The first US presidential debate was pure chaos. Here’s what our experts thought

Because of the internet and social media, it is now easier for men and women to meet someone from the other side...
Read more
Lifestyle

Filipino food is ‘bland’ and the ‘worst in the region’

If you want to pick a fight with Filipinos, try criticizing them about their food. Take for instance Tom Pepinsky’s tweet placing...
Read more
Lifestyle

Netflix’s new show ‘Street Food: Asia’ which debuted on April 26, 2019 ventures into the street food culture and what goes on...
Read more
Lifestyle

Forget what you know about emotional support animals (ESA), because the ESA mythbusters are here, reporting for duty! It's been a...
Read more
Lifestyle

To be Small is to be Radical

A few years ago, after coming across the writings of Benedictine abbess Christine Valters Paintner I started the Word of the...
Read more

MANILA -- Money transfer leaders Western Union, LBC and Pera Hub are hopeful about the continued strength of their tie-up after noting that their...
Read more

To be updated with all the latest news, offers and special announcements.